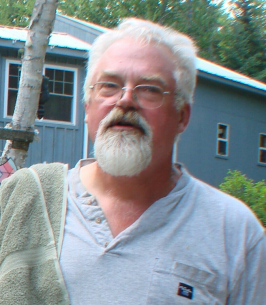 Turner – Clayton Leavitt Matthews, Jr., 66, of Turner, affectionately known as “Cub”, passed away at home on August 31, 2022, following a battle with cancer. He was born on April 30, 1956, the son of Beverly (Jones) Matthews and Clayton Leavitt Matthews, Sr. Cub Graduated from Edward Little High School in 1974. Cub ran several successful businesses in the Lewiston/Auburn area. Later in life he was employed at Ricker Hill Farms where he became part of the Ricker family, which included his tractor. Cub married Debra Anne Dubreuil on August 26, 1994. Cub, though humble, was known as an artisan woodworker with a love of the blues and an affection for nature. His favorite times were spent with his children and grandchildren exploring the outdoors. Cub was a kind and gentle soul remembered for his clever humor. Cub is survived by his loving wife Debra, a son Clayton L. Matthews III and wife Kayla, a daughter Kimberly Blais and husband Patrick, six grandchildren: Addison, Clayton IV, Owen, Gavin, London, and Emma, a brother Andrew Matthews and wife Cynthia, a sister-in-law Louise Matthews, a niece Stephanie, and a nephew Kevin. Cub was predeceased by his parents and a brother Christopher. Messages of condolence may be sent to the family at www.finleyfuneralhome.com.